A multiplayer online game is the best mapping of reality, making it the best place to experiment: Players control their virtual characters to perform various actions and activities, mapping the real world at very low cost. Playing games is a very effective way of learning, some games can even guide social development.

Plato Farm is a metaverse business game. Users can build a civilization from scratch with their wisdom in a whole new virtual world and accumulate wealth, contacts and prestige, develop social groups, create organizations, form a larger and more efficient social system and earn a generous return at the same time. time.

Players usually start Plato Farm with a farming business. They can choose to grow crops or raise livestock, turning their barren land into a thriving city. The different choices of the different actors form the divisions of labor in society. They should cooperate and trade with each other and develop the civilization and productivity of society step by step.

It is the “utopia” described by Plato. Basic economic activities gradually connect with each other and become the basis of political unity. This process is replicated in Plato Farm. For example, if players want to produce milk, they need to buy cattle farms, cattle feed, etc. Therefore, they can establish a long-term relationship with the actors who produce these items and form a supply chain; More advanced foods require a lot of milk, so players who produce milk can form an alliance to maximize their profits.

All these actions are motivated spontaneously by the interests of the player. In Plato Farm, all production materials are written in the blockchain by smart contracts, i.e. Plato Farm is a completely decentralized market economy without government intervention. This type of gambling relationship driven by economic interests is very important to our daily lives. This is what you can learn in Plato Farm. That’s what makes the game fun!

In Plato Farm, players can walk through the development history of human society. It is a blockchain based NFT game. In-game accessories are liquid NFTs that can be traded. An important mechanism is that NPCs can recycle these NFTs, and the amount recycled and the price of NFTs are determined by the game’s GDP. Such a mechanism maps productivity development and equipment upgrades into reality, and it also reflects the law of development that workers determine social progress.

From a game-to-win perspective, the NFT recycling mechanism provides players with a longer-lasting advantage. When user growth enters the bottleneck stage, most GameFi projects choose to add new gameplays to maintain player revenue. Plato Farm’s NFT recycling mechanism not only guarantees benefits for users, but is also more realistic.

To guarantee the player’s income, Plato Farm also has a bond-based mechanism with token deposit income, which is the first among its GameFi peers. With their judgment, players can choose to conduct hedge trades in Plato Farm: they can sell their NFTs or the Mark game token to the smart contract, and buy them back when a higher profit opportunity arises.

Game assets in other Gamefi projects can only be used for one-time transactions. Therefore, players of these games can only follow the life cycle of the game and see their returns get smaller and smaller.

The bond-based mechanism is similar to real-world futures and options. It is also consistent with reality and historical development. After all, futures and options were first adopted in agriculture. The relationship between supply and demand determines the price. The harvesting of agricultural products is strongly influenced by the natural environment, such as the weather. To secure their profits, farmers and traders create future transactions to prescribe the price for the coming year.

Most blockchain games come in the form of DApps. Plato Farm, on the other hand, adopts the APP form. Combined with the Unity professional game engine, it provides excellent game screen quality and excellent gaming experience.

Plato Farm uses the ERC1155 protocol to create various in-game prop NFTs, which greatly improves efficiency and reduces time and gas costs. Ownership of in-game NFTs belongs to the player and is stored in their own wallet. At the same time, players can freely trade their NFTs.

The most famous blockchain game, Axie, is registered by email, and its players need to register the Ronin wallet and then link the email through the Ronin wallet. The whole process is quite complicated.

Plato Farm, on the other hand, has a decentralized wallet feature, and players can directly use the wallet to login without manual binding. Players can play the game just by logging into the wallet, which is much easier. If players don’t have a wallet, they can simply create an in-game wallet.

It is quite inconvenient for novices to buy pets from Axie. The general process is as follows: 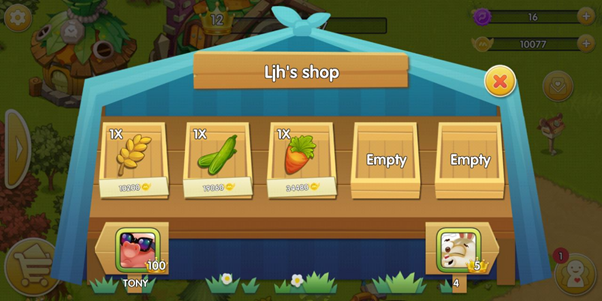 Users only need HT and USDT to buy NFT from Plato Farm. There are two modes of purchase:

Method 1 is suitable for purchasing all NFT accessories:

Players can buy MARK tokens with USDT in-game and then buy NFTs with those MARK tokens.

Method 2 is more suitable for buying NFT except for commodities:

Players can use MARK to purchase NFTs except Commodities directly in-game. 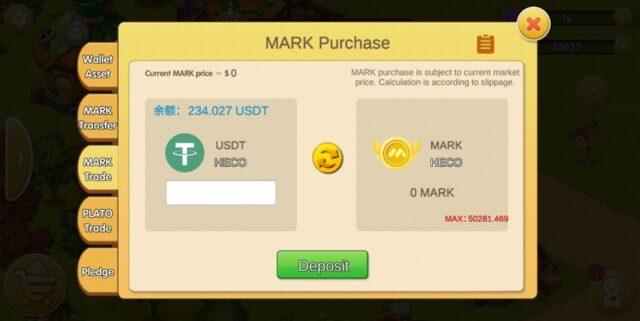 Plato Farm supports in-game token swaps, while other blockchain games need to perform token swaps outside of the game.

Plato Farm can redeem MARK and PLATO tokens directly in-game and use them to purchase other accessories. The onboarding trading engine will automatically select the optimal path for placing orders on major decentralized exchanges such as UniSwap, SuShiSwap, and MDEX. Allow players to swap MARK and PLATO tokens with just one click.