Everyone converges on Tar Valon in this episode. Mat and Rand apparently joined a group of pilgrims on the way to town. As they approach Tar Valon, Rand stops and looks at the volcano called Dragonmount. He says it sounds familiar to him, as he’s seen before.

At the inn, Mat asks Rand to reassure him again by telling him that he wasn’t the one who killed the Grinwells – the family that took them in the last episode. Rand does so, reminding him that he and Thom saw the Fade emerge from the shadows. Mat doesn’t seem convinced, and the darkness drags him deeper.

Loial, son of Arent, son of Halan – Your name sings in my ears

However, Rand won’t let his friend’s angst stop him from exploring the city. He finds a library, where he picks up a copy of the Karaethon cycle. This book contains the prophecies of the Dragon, an important text in the world. Before he can dig, Rand hears a voice rumbling behind him. This is Loial, the son of Arent, the son of Halan. (His name sing in my ears.) Loial is an Ogier, a race of peaceful beings known to be great scholars and builders. It was the Ogiers who built Tar Valon, and many other wonderful structures around the world.

As Ogier, Loial represents one of the few non-human races in the world. He’s a fan favorite too, and I’m here to tell you that this portrayal of Loial is perfection. Rumbling voice, drooping eyebrows, larger than life stature. He brings a certain lightness to the screen, with his generous nature and his sincere desire to help.

Loial confuses Rand with an Aielman, as red hair is a sure sign of the Aiel lineage. Rand insists he’s just a boy from Two Rivers, but Loial doesn’t buy him. Rand is an oddity, and Loial loves oddities. The two discuss a book called Jain Farstrider’s travels, a text that Rand strongly associates with Egwene. He talks a little about her to Loial, before being taken to attend a procession going down the street. The Aes Sedai returned home, with Logain in a cage. 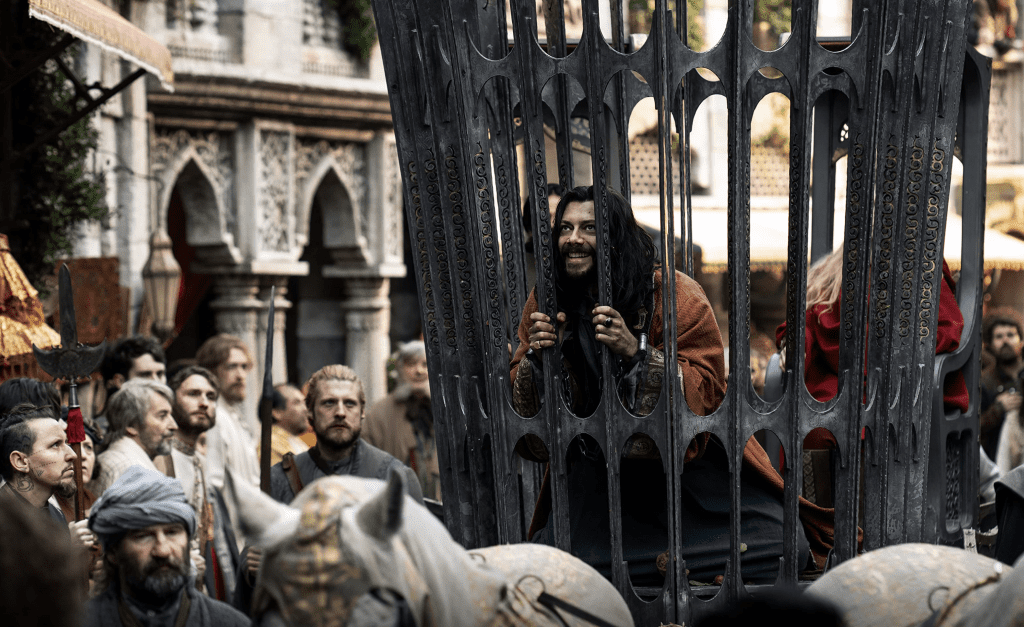 Rand joins Mat to watch the parade (where we catch a glimpse of Padan Fain in the crowd.) At this point, Logain is suddenly out of his boredom. He looks up, meets Rand’s eyes, and begins to laugh hysterically. This annoys the two young men, who swear to never let the other go crazy unless one of them can channel.

It’s important to note that in the books, Logain has a talent that allows him to identify Ta’veren. In the previous episode, he used Moiraine’s own words to describe Nynaeve “like a blazing sun”. In the text of the books, those who can identify Ta’veren often describe a similar golden halo around them. 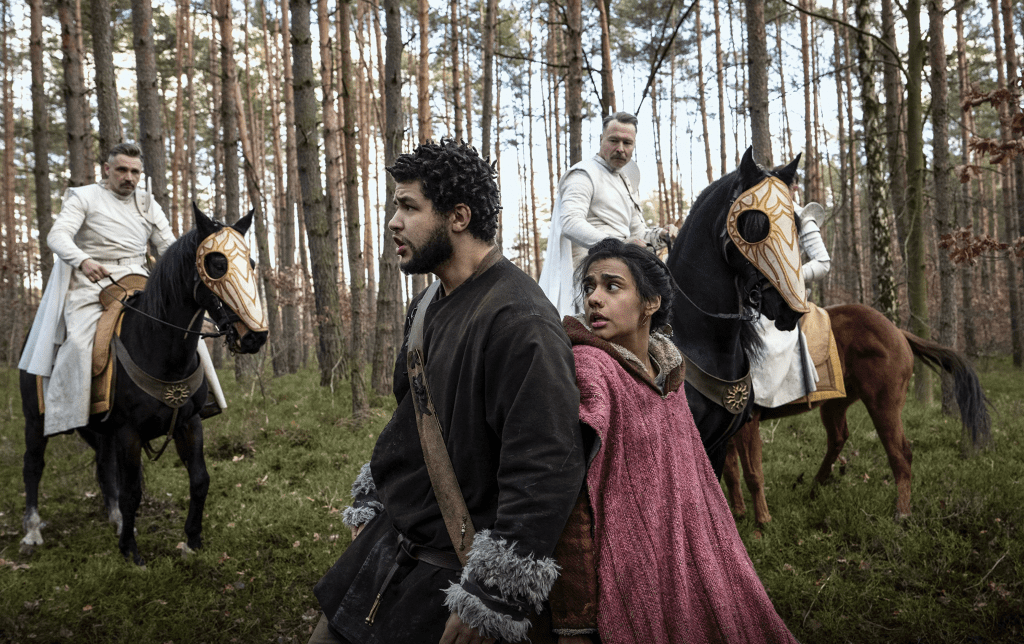 As the Tinker caravan arrives in Tar Valon, it is stopped by the same group of White Mantles that we have seen twice before. Valda quickly spots Egwene and Perrin among the travelers. He remembers their faces and demands that they be turned around. The Tinkers refuse, and chain their arms to create a physical barrier to protect them. I have described the Whitecloaks to several new fans as some sort of “religious police force.” And as they brutally beat the Tuatha’an – literally the most peaceful group in the whole world – this real-world parallel is brought home.

Aram helps Egwene and Perrin escape, but their escape is short-lived as they are quickly picked up by the White Mantles. The two young people are dragged in front of Valda. They treat Egwene like an object, to be cleaned and used if necessary. And they treat Perrin like an animal, tie him up and torture him to get under his skin. 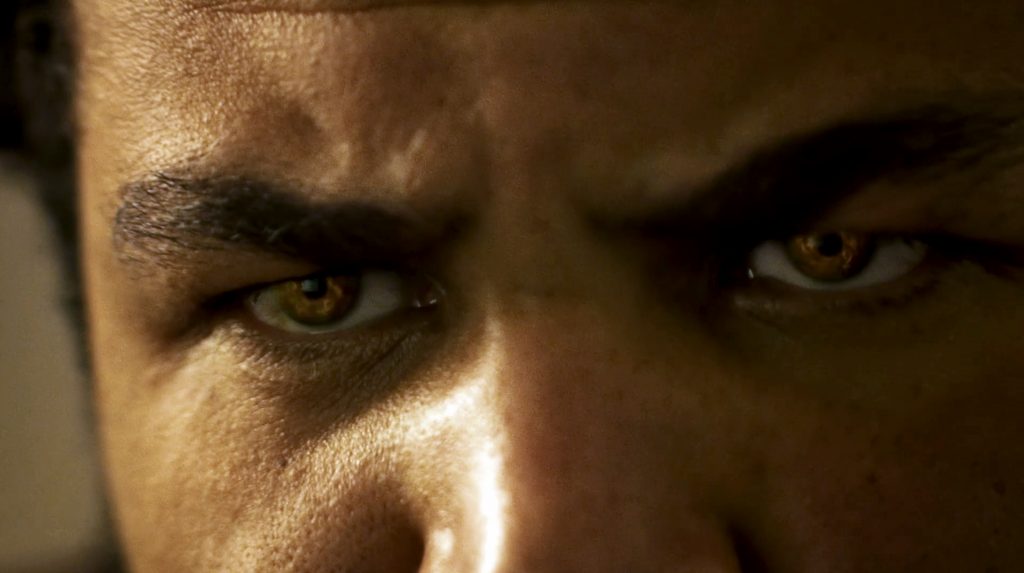 Valda knows Egwene can channel, even though she’s not yet a full-fledged Aes Sedai. He gives him the choice: touch the One Power and be killed. Or do nothing and let Perrin die instead. This is where Perrin finally confesses to Egwene that it was he who killed his wife Laila in the first episode. He thinks it’s his punishment, that he deserves to die.

As Valda continues to torture Perrin, Egwene finally obtains the calm necessary to channel and break her bonds. Wolves howl in the distance, and Perrin’s eyes suddenly glow gold. This terrifies Valda, giving Egwene a chance to stick a knife in his neck and grab the Aes Sedai rings he had taken as trophies. The exterior of the camp is in chaos, as the wolves attack the White Mantles. They seem to protect Perrin and Egwene. When a wolf approaches them, Perrin knows he won’t hurt them. It’s almost as if he can understand them …

In Tar Valon, Mat empire. While Rand clearly struggles with how to help him, Loial arrives. The Ogier took it upon himself to go to the grounds of the Tower and find the woman Rand was talking about. However, it is not Egwene who comes out from behind him but Nynaeve. This is the first time the two have seen each other since long before Bel Tine. Rand still thought Nynaeve was dead and they have a touching reunion. I absolutely love Loial in the background of this moment explaining that he identified Nynaeve by his braid, as this is a common custom in Two Rivers and of course he would know.

This is one of the many little moments in this episode that seem to indicate the nature of Ta’veren at work. The show didn’t fully explain this, but Ta’veren like Rand, Mat, Perrin, Egwene, and Nynaeve are core pieces of the model that can shift the likelihood and affect the tapestry around them. How Loial immediately helped Rand may be indicative of Ta’veren’s influence. Ta’veren can feel too, so it makes sense that Nynaeve found Rand and Mat before Moiraine could. Blood calls blood after all in The wheel of time.

Focus on the keepers

Each character has a moment to shine in this episode, although a lot of the focus is on Stepin and the Guardians. It’s a great example of how the show improves on the source material. In the books, the Warders didn’t have a lot of reviews or separate personalities. But the showrunners drew on the details of the text to bring this community to life.

Stepin was shattered by the death of his Aes Sedai, and the series uses it to illustrate how deep the bond is. Peter FranzÃ©n is amazing as Stepin in this episode. Her raw grief permeates every scene, from her ritual dressing with the other Guardians to her drunken request from Nynaeve for more sleeping herbs, and her quiet moments with Lan.

One of the many things that I love The wheel of time in “Blood Calls Blood” is how he shows a representation of positive masculinity. Warders are the best warriors in the world (apart from the Aiel). They can take down dangerous monsters with ease and skill. But in private, they are deeply emotional and complex individuals. The intimacy between men in this episode is refreshing to see. Their heartwarming touches and the way they confide deepen the characters and the world.

After some gossip about his budding relationship with Nynaeve, Lan wakes up to find Stepin drugged him. In a heartbreaking scene, we learn that Stepin committed suicide. The episode ends as it started, with a funeral. Instead of the stoic Aes Sedai bidding farewell to their fallen companions, we witness a wave of raw grief from the Guardians in the wake of Stepin’s death. Most affected is Lan, who hits his chest and lets out a cry of pure agony.

Moiraine watches with tears streaming down her face. She can literally feel Lan’s pain. However, those tears also point to something deeper, some of Moiraine’s fears about her connection to Lan. It’s important to note that earlier in the episode, Moiraine spoke with Alanna about how one Warder link could be passed on to another. Only time will tell what that means for their characters.

Stay tuned for next week’s episode as we delve deeper into Tower politics. And be sure to follow Comic Years on Facebook and Twitter for all the latest news of the genre.